Have you ever enjoyed a degustation dinner before? Pretty good aren’t they? So many courses, so many flavours, an extensive range of ingredients being used… some you have heard of and some possibly not. You feel all fancy and suddenly you’re at expert food connoisseur level going over every detail with your dinner companions like you’re a judge on one of those cooking shows. Minus the cravat, of course.

BUT! Have you ever experienced an amazing degustation dinner, on a salt lake, in the middle of nowhere, under the stars?

Yep that’s us, about to be served a stunning ten course degustation dinner by the incredible Fervor team. If you’re a bit jealous then join the queue. There was only a handful of us lucky punters who scored a ticket to this event and by golly I’m glad we didn’t mess about.

For those who haven’t heard, Fervor are a team of passionate foodies who create unique pop-up dining experiences, using locally sourced produce, throughout Western Australia. They are led by the one and only Yoda, real name Paul Iskov but I’m pretty sure only his parents call him that… maybe when he’s in trouble. Yoda’s experience as a chef reads like a map of the world with acclaimed restaurants such as Amuse (Perth), Vue De Monde (Melbourne), Pujol (Mexico City), Noma (Copenhagen), COI (San Francisco) and D.O.M. (São Paulo) all listed on his resume. Yoda has created an absolute monster with Fervor as their dining experiences are becoming increasingly popular around the state.

These guys have literally popped up everywhere, from sunny Broome to Karratha and Karijini in the north, through the dusty middle in Mukinbudin and Dalwallinu and all the way to the crisp bottom of the state in Albany and Denmark. Their events have become known as a must-do, if you can manage to score a ticket before it sells out.

The dinner we attended was at Turtle Rock, 20kms from the nearest town, Mukinbudin, in WA’s wheatbelt region. It was like something out of a movie. The vast landscape, the sun setting in the distance, it was pure magic. We arrived at 5pm for pre-dinner drinks and canapes which consisted of crocodile chorizo, emu salami, mussels and yabbies, all paired nicely with a glass of lemongrass beer, which is brewed by a local farmer. All produce Fervor use is foraged from the region where the dinner takes place, which makes these events even more special as you get to experience local flavours that you wouldn’t normally get to taste. They select fresh ingredients and pair them together in such a unique way that you wouldn’t realise you’re actually eating an animal from our coat of arms. Yes, the emu salami was delicious.

As the sun was setting we took our places at the tables and settled in for the main event. The tables were set with wildflowers from the region. The fire was cranking. Red wine in hand. I think this is the part where I type #bliss or #lifesgood or #shityeahbestnighteverrrr … or something along those lines.

The “kitchen” set up was right next to us so we could see the guys prepping each dish. They encouraged us to come forward between courses to watch them plate up and do their thang. It’s amazing what you can do from the back of a ute! The guys had it down pat and didn’t falter on a thing.

As I mentioned, this was a ten course dinner. So I won’t run through the entire menu and every dish in minute detail as I’m sure you have a lot of things to do today. But I do have lots of photos to share. Not of every dish though as it seems as though I forgot to snap a few courses. I blame my lack of photos and concentration on the lovely bottle of red that accompanied my dinner. So I have included a few photos below for your enjoyment…

Here’s a peek of the menu so you can see the courses we enjoyed. Each course is noted by only certain components used and doesn’t list everything in each dish… if it did then the menu would be as big as Matt Preston’s cravat collection. But trust me, whatever they used created incredible flavour combinations in each individual dish.

After all that, we finished the night with a treat of marshmallows which we toasted over the open fire and some de-LISH little morsels of heaven (also known as chocolate fudge). Bloody sensational way to end it all I must say!

With our bellies full and in complete awe of what we just experienced, we started the drive back to town, all the while debating on which dish was the best. As you can guess there was no clear winner as each dish was a standout in it’s own right. Hands down the most amazing menu I’ve ever enjoyed. 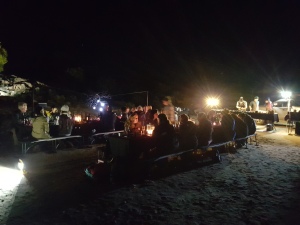 Peeps, if you ever get the chance to get to one of these dinners then do it without a second thought. With the Fervor team still out and about at the moment I highly recommend signing up to their mailing list so you are in the know about upcoming events and where to find the team next. Check it all out at www.fervor.com.au

Now, where can I buy that cravat from…

Got some thoughts on this? Let us know! Cancel reply

Ahh I do love a fresh diary @writetome 🙌 This year could be just as bonkers as last year... bring it on 🤪
Gang, I've been working behind the scenes on a bunch of things, one of them is sprucing up my newsletter 🤩
Things my Dad loves: making jokes and painting. Is he good at it? Well yes and no 😆 the paintings aren't bad but the jokes are terrible 🤣 but that doesn't matter, at least he gives it a go!
I love travelling and I miss exploring new places. Anyone else with me?!
💛
It's all a bit much isn't it.
This pretty much sums up my year. New job, trying to not fuck it up!
I bloody LOVE Christmas! And whilst I do love our hot Christmas days here, I also really enjoy seeing faraway places like London at this time of year. It's so festive and magical!🎄💖
A year changes you a lot. You might not notice it but it does. Change is good! The change over ten years though? Huge.
Self-care Sunday in full swing... much needed after yesterday's hangover 😐
Swooning over @jessswan_art goodies 😍 I want them all!
OMG this diary 😍 is too much!! Thank you @dreamy_moons for creating something like this 🙌🏻
Full moon in Aries ●
•▪︎•》This week's thought... Forget everything for a moment and take five minutes to think about where you are right now and how far you have come.
Some cuteness for your Friday arvo... Penguin Random House had this little cutie as a helper at their book distribution centre. He is too much 😍 Hands up who wants a penguin at work!? 🙋‍♀️
Follow stay curious on WordPress.com
Loading Comments...
%d bloggers like this: